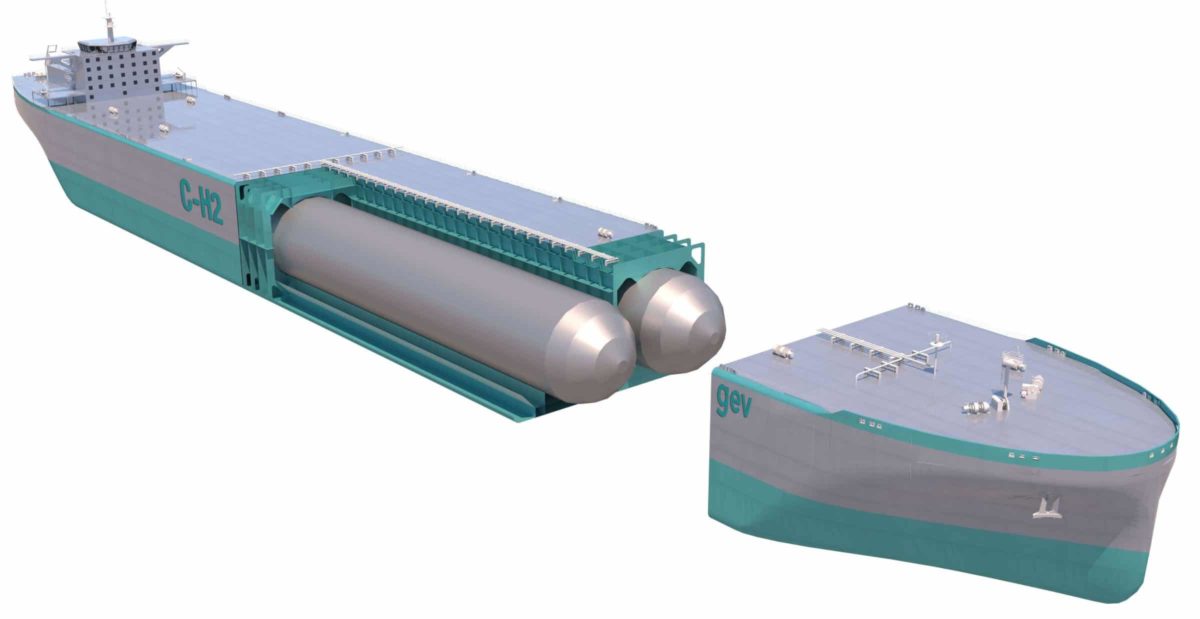 A scoping study has found Global Energy Ventures’ compressed hydrogen ship to be both technically feasible and ‘highly competitive’ to transport the hyped future fuel at distances that conveniently connect Australia to Southeast Asian markets.

Describing itself as “delighted” with the study’s results, Global Energy Ventures (GEV) says it now has the confidence to “rapidly progress” the development of its compressed hydrogen C-H2 Ship to the next phase. The “world first” ship design, which has already been patented, can transport 2,000 tonnes of compressed hydrogen. It aims to be ready for the windfall expected to follow the billions of dollars invested in developing the hydrogen industry worldwide.

GEV, a marine transportation company headquartered in Western Australia, says the study confirms it can deliver not only the ship itself, but a full zero-emissions compressed hydrogen (C-H2) supply chain with minimal barriers.  It expects commercialisation in the next five years, aiming to meet both demand and the timelines of Australian export projects.

“The idea is that the C-H2 supply chain will be commercially available before the alternative proposals of large-scale liquefaction of hydrogen or ammonia,” GEV’s statement, released on Monday, said.

This would mark a significant achievement as delivering green hydrogen through zero-emissions transport options have been front of mind for many potential importers, according to Smart Energy Council consultant Scott Hamilton.

Focussing squarely on Australia and its aspiration of becoming a leading global exporter of green hydrogen, GEV’s Executive Director Martin Carolan said: “C-H2 can become a game-changing solution for the hydrogen economy and deliver a timely and energy efficient ‘port to port’ zero emission supply chain for green hydrogen to be produced in Australia for markets in the AsiaPacific region.

The study looked at exporting green hydrogen at volumes of 50,000; 200,000; and 400,000 tonnes per year at distances of between 2,000 and 6,000 nautical miles, comparing compressed hydrogen with the other possible supply chains, liquified hydrogen and ammonia.

“When compared to liquefaction and ammonia, we have demonstrated C-H2 is the simplest, with minimal technical barriers to achieve commercialisation in timelines for large-scale projects seeking a transport solution.”

“GEV will now accelerate its plan to address key markets for green hydrogen, alongside advancing the C-H2 Ship approvals from American Bureau of Shipping expected in [the first half of] 2021 and define our own green hydrogen export project in Australia to support the construction of a pilot scale C-H2 Ship.”

How the ship works

The C-H2 Ship can carry up to 2,000 tonnes of hydrogen in its containment system made up of two 20 metre diameter tanks in the hull of the ship. The company says its design “eliminates the requirement for onsite storage, as the C-H2 Ship is itself the storage.”

The company described its move to develop a compressed hydrogen ship as a “natural progression to meet a market requirement for the storage and marine transportation of hydrogen,” as it draws on decades of experience in the design and engineering of pressure vessels, previously envisioned for compressed natural gas.

Getting green hydrogen out Australian gates

GEV says the scoping study shows its compressed hydrogen supply chain is economically “very competitive” compared to shipping liquefied hydrogen or ammonia at distances of 2,000 nautical miles (3,700 kms). As the company notes, that is roughly the distance between northern tips of Australia and Singapore.

With this in mind, the company says it will focus on exporting from project locations in the mid-west of Western Australia, such as Geraldton, across to Queensland. Both of these states have recently seen considerable funds allocated to the development of green hydrogen industries.

As the company notes, its plan will require massive renewable energy generation, such as that from the Asian Renewable Energy Hub in Western Australia’s Pilbara region. Approved by government last October, GEV is relying on the promise that the hub will become a top green hydrogen production point.

The ultimately goal is to get the green hydrogen produced in Australia to markets expected to be hydrogen demand centres, including South Korea, Japan, and parts of China.

Europe is also expected to be a importer of Australia’s green hydrogen, but given that GEV’s ship only appears competitive at ranges under 8,300 kms, the company is understandably focussing on South-East Asian markets at present.

With a US Patent application already filed for GEV’s C-H2 ship in December 2020, the company now plans to undertake a detailed marketing plan for the C-H2 supply chain as a “competitive and viable alternative for the ‘port to port’ export of green hydrogen from Australia,” as shown below.

The company’s 2021 will also see the development of its own green hydrogen export project to support the construction of a pilot scale C-H2 Ship.

The only material barrier, according to GEV, is the company achieving American Bureau of Shipping C-H2 Ship approvals. However, the company says it expects an Approval in Principle in the first half of 2021.

If all goes according to plan on the approvals front, the company is confident it will reach its target of Final Class Approval in 2022.

In terms of technical risk, the scoping study found GEV’s compressed hydrogen supply chain to have a lower technical risk compared to liquified hydrogen and ammonia. “The C-H2 supply chain consists of compressors, pipework, loading infrastructure and C-H2 Ship Fleet. Hydrogen compressors (designed for pressure as high as 700 bar) have been in operation for decades with the associated piping and loading equipment having already been developed for various onshore applications,” the company noted.

Just last month, GEV announced it has signed a Memorandum of Understanding (MOU) with Canadian-headquartered fuel-cell manufacturer Ballard Power Systems to design and develop a hydrogen fuel cell system for its C-H2 Ship.

Ballard will be responsible for the design of the fuel cell system, using its trademarked FC Wave Technology, and will assist GEV with the integration of the system into the design of the ship. “During 2021-2022, both parties will work collaboratively to complete a final design and procure all necessary approvals, and full costing for the C-H2 Ship, utilising a Ballard FC System,” GEV’s statement said.

Important to note, GEV’s scoping study was premised on the notion that it would be provided a constant supply of green hydrogen by a third party at a price of US$2/kg (AU$2.6/kg) at a pressure of 20 bar. It also assumed port facilities at both the supply and customer points were made available at no cost for all three supply chains.