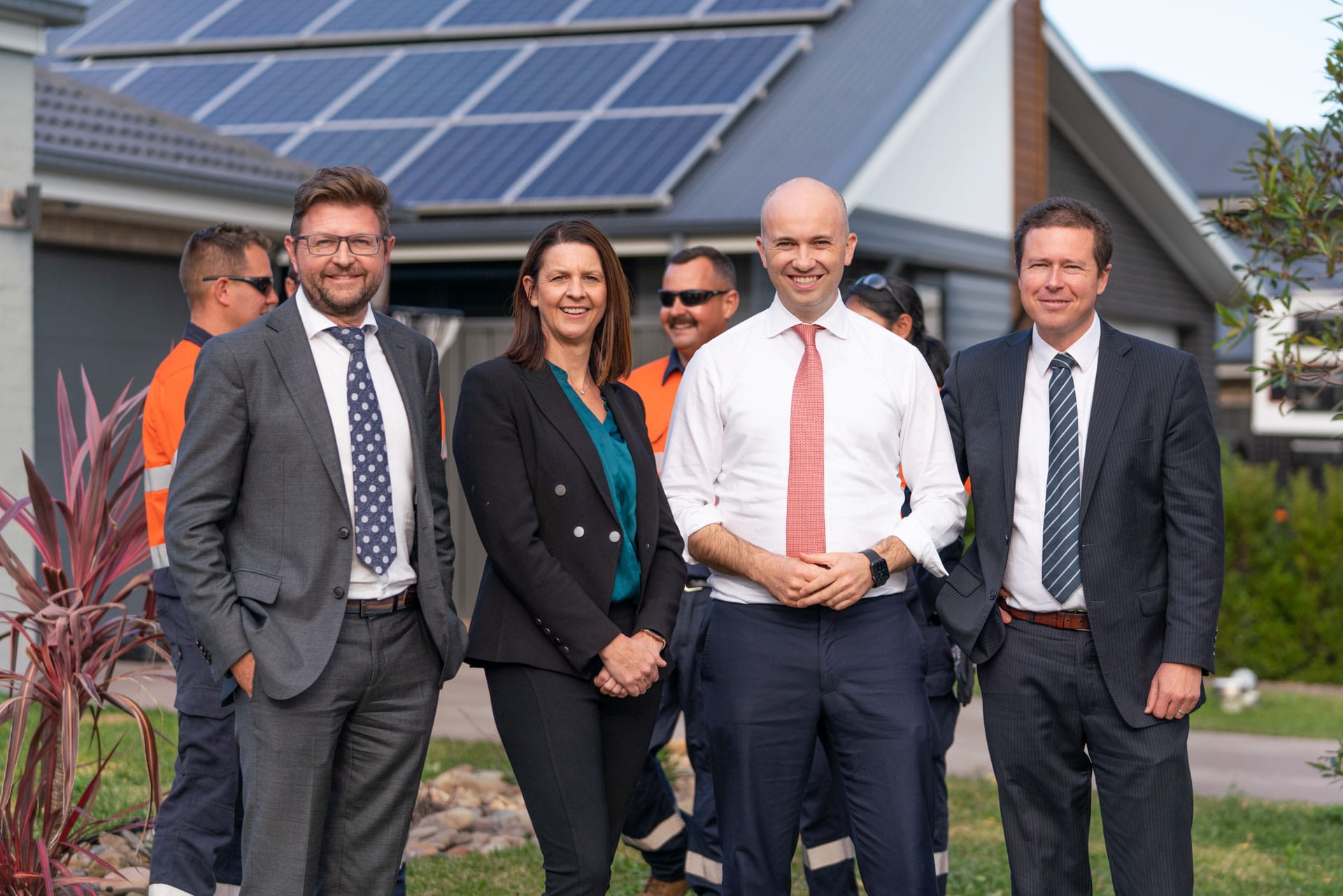 New South Wales, Australia’s most populous state and largest economy, has upped the green ante, today setting a new target which will see it rival clean energy powerhouse South Australia. The state government is seeking to spur more than $37 billion in private investment from its policies, hoping to double the state’s economy.

Pictured: NSW Minister for Energy and Environment Matt Kean with Intellihub CEO Adrian Clark,
Endeavour Energy’s COO, Scott Ryan, and its chief customer officer, Leanne Pickering, at the launch of the Off Peak Plus Program in May.

The New South Wales government today released an update on its plan to get to net zero, describing itself as “on track” to halve emissions by 2030 – leading it to formally increase its target from 35% to 50% emissions reduction compared with 2005 levels.

By setting clear plans for its emissions reduction journey, the state is hoping to send signals to clean energy investors and is expecting its policies to attract more than $37 billion in private investment. In fact, off the back of its new low-carbon leadership, New South Wales (NSW) is seeking to become Australia’s first trillion-dollar state within the decade.

The measures, introduced by state environment and energy minister Matt Kean, build on the 2020 plan to attract 12 GW of renewables and 2 GW of pumped hydro to NSW by 2030, part of its NSW Electricity Infrastructure Roadmap.

The state’s The Net Zero Plan: Stage 1 Implementation Update was published this morning, and builds on the original Net Zero Plan from March, which set out visions for state’s renewable energy zones, electricity grids, electric vehicles, hydrogen, technology industries and more. “As a result of our policies, the state’s emissions are projected to fall by 47-52% on 2005 levels by 2030 under independently peer reviewed modelling,” Kean said in a statement today.

Such a dramatic drop would push NSW ahead of Victoria, which is currently targeting a 45-50% emissions reduction by 2030, putting it on par with South Australia, which has one of the most progressed electricity grids in terms of renewable penetration in the world.

“This is about putting the policies in place to give industry and investors certainty, not only to protect our planet but to future-proof our prosperity and way of life,” NSW premier Gladys Berejiklian said.

He described the announcement of halving of emissions by 2030 “transformative”.

In addition to driving high-end investment, the government also believes the Net Zero plan will save NSW households around $130 on their electricity bills.

Importantly, its Implementation Update also outlines a commitment to disclose the state’s climate related financial risks and opportunities for the first time. A measure it says is now consistent with the Taskforce for Climate Related Financial Disclosures framework.

As Australia’s most populace state, NSW has its biggest economy – as well as the country’s largest coal-fired fleet. Nonetheless, the state’s Liberal government has powered ahead with its clean energy plans, even gaining the support of the notoriously climate action averse National Party.

With most of the clean energy investment set to be in the state’s regions, NSW Nationals leader and deputy premier John Barilaro has publicly supported the new targets, saying: “The entire state will benefit from the economic and employment opportunities in low-carbon technologies.

“Whether it is in modern manufacturing, minerals or agriculture, regional NSW is home to the skills, infrastructure and resources needed as the demand for low emissions technologies like batteries and hydrogen grows,” Barilaro said.

It seems Kean’s prudence in framing climate action as an economic driver rather than a threat to Australia’s way of life is enjoying widespread success. “Taking action on climate change does not come at a price to our prosperity – the fact is our state’s fortunes are tied to the fortunes of our planet,” Kean said in his foreword in the update.

This state level cooperation between the Liberal and National parties stands in stark contrast to the current federal situation, which has descended into fresh infighting between National leaders publicly opposing targets and inner-city moderate Liberals whose seats are now in jeopardy of being taken by climate-focussed independent candidates.

It’s also worth noting the NSW Liberal party’s climate targets are now almost double those of their federal colleagues, who remain glued to just a 26% – 28% reduction in emissions by 2030, conceding only that net zero by 2050 would be “preferable”.

While the federal government’s targets are clearly not enough, it’s unclear if even the state’s more ambitious aims will cut the mustard. Kean seems to acknowledge this though, saying: “this plan should not be seen as the final word on emissions reduction between 2020 and 2030, but a foundation on which we will build.”

And the state’s building is indeed happening. From the beginning of this month, the NSW government began providing rebates and phasing out stamp duty for some electric vehicles (EVs) as part of its strategy to boost EV sales. It’s also committed to spending $171 million over the next four year on electric vehicle charging infrastructure as part of the plan, which will see almost half a billion invested in the technology in total.

Additionally, in September Kean told ABC’s Radio National that the state could “absolutely” phase out coal-fired generators by 2030. “We’ve got the biggest renewable energy plan that’s been legislated in the nation’s history right here in New South Wales, and that means as our coal fired power stations come to the end of their lives over the next years that will be replaced with renewables,” Kean said.

While Kean’s big vision has multiple components, it rests heavily on the development of the state’s five renewable energy zones (REZs). And the reaction to those has already been massive, with the state government revealing in August that more than 80 new solar, wind and energy storage projects, totalling a huge 34 GW, had been proposed for the New England renewable energy zone, Australia’s largest.

Thanks to Bella Peacock at PV Magazine